Ancient Roman armies used three types of horns. The tuba (shown right) was a straight instrument, about 117 cm (46 in) long, made of bronze, which was a predecessor to our modern trumpet. The cornu was about 3 m (10 ft) long with a large, conical bore. The horn was curved around in a G shape with the bell projecting over the players head. The buccina was very similar to the cornu, but had a narrow, cylindrical bore. 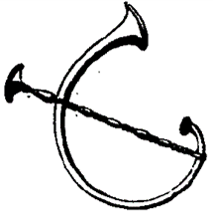 The Roman military writer Vegetius described the use of these horns. The tuba “sounds the charge and the retreat,” and was used to regulate small units of men during work. The cornu “are used only to regulate the motions of the colors.” But on the field of battle they both sounded together. The buccina held a special place and was “appropriated to the commander-in-chief and is used in the presence of the general, or at the execution of a soldier, as a mark of its being done by his authority.”

History of US Competition Bugles: Part 2

The Tomb of the Unknown Soldier